Family Owned Business Part I: Building a Business that Works. 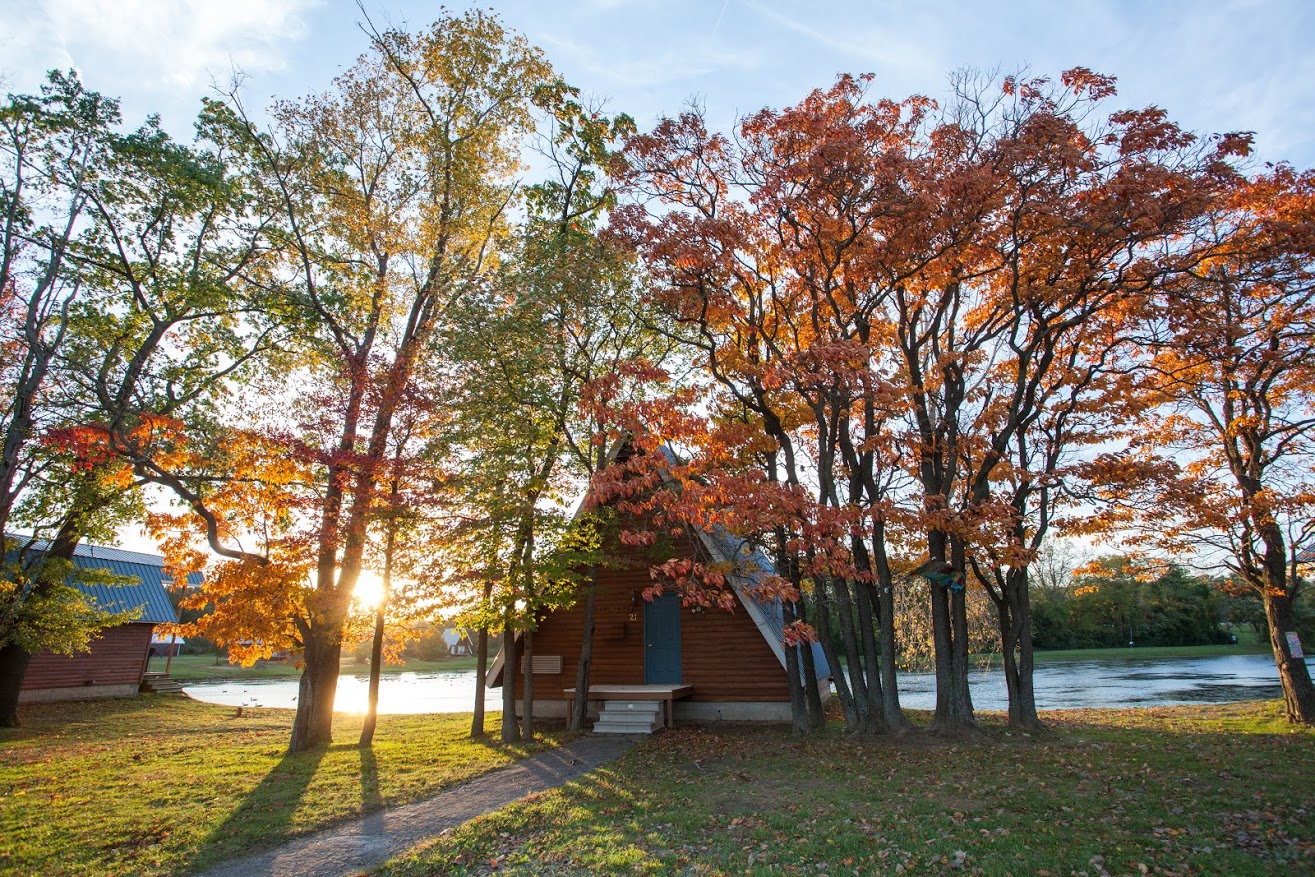 Laura and Rich Ostergren have run Serenity Springs for 20 years now, receiving only shining reviews from everyone who stays there. I sat down with Laura to talk about the story of Serenity Springs, and what it takes to run such a successful company.

Katie: How did you first decide to start Serenity Springs?

Laura: It was kind of a vision of Rich’s. We became aware of the idea or the need for an adult getaway — something more special than a hotel, something that was just a little different — so Rich said, “hey, wouldn’t it be neat to have something like that, but have it on a piece of property, so you actually could take a walk or look at a lake?” You know what I mean? Something with more to it.

K: Yeah. How did you choose the location for Serenity Springs?

L: We’d had our eye on a piece of property, and then suddenly it just happened to be for sale. We looked into it, purchased the property, and it probably took Rich seven years to build.

We built everything ourselves. We built the three warehouses so that we would have a place for storage of equipment and materials. Once the warehouses were done, we built the barn and what we call “the carriage house,” which is the office. Then we built the first five cabins. We opened in 1999 with just the first five cabins, then we slowly worked on the other units, and as we felt we were ready to expand, we grew a section at the time, more or less. We went from five units to 11, and then we went from 11 to 18, and then — I’d have to look at the calendar to check the year — we took a big jump and went from 18 to all 36.

K: Wow. And this is just Rich building all of this?

L: Well, him with a crew of guys. He wasn’t alone alone — throughout the years, we’ve had different guys working for us. But Rich did all the layout of the property, including the roads, cut down trees, put in the sewer, and made sure all the electric cables were buried, so there was a lot of preliminary work in those first seven years before we opened.

K: When you first bought Serenity Springs, were you already living in Michigan City? Or were you still living in Chicago?

L: At first, we actually had a house both in Oak Lawn, Illinois, and in LaPorte. We’d work during the week and would come out to LaPorte on weekends. Then it got to a point where we were going to have to choose between the two because, at that time, our daughter was five years old and was going to have to go to school, so we had to decide which place we were going to call home. So we chose the house in LaPorte.

L: No, I only worked as a nurse for, I would say, three years after I graduated, because Rich was always kind of an entrepreneur, self-employed, and I basically was his girl Friday. And then when we started the project at Serenity, we still owned a real estate office in Illinois. He did both for a number of years. He’d work early in the morning — he’d start at 5:30 or 6 in the morning — working at Serenity, and then two or three days of the week, he’d stop working at noon, take a shower, drive into Illinois, and do what he had to do there. I mean, I look at pictures, and I think about what we did, and I have no idea how we did it. I really don’t.

I mean, it’s like they say: adrenaline, and when you’re on a mission, you can do some impossible things… but still, I really don’t know how we did it.

K: Yeah. Wow. That’s remarkable. When did you hire your first employee?

L: Well, when we first opened with the five cabins, it was kind of on a whim. It was Labor Day weekend of 1999, and we just thought, “hey, you know, it’s the holiday weekend. Let’s just go for it and see what happens.” So we basically turned the phone on and got the place up and running. I had one girl in the office who took reservations. I would do what we call porter — I would meet you at your cabin, explain everything in the cabin, and get you situated. And then I had one housekeeper. For quite a while, it was just the three of us. And, you know, as we got busier and took more reservations and that type of thing, I was able to hire more people along the way. But I would say, for probably the first three or four years, I greeted and brought people to their cabins myself. At the beginning, we didn’t have six guests every night. I mean, there might just be one on Monday, two on Tuesday, you know — so it was something that the three of us could handle.

But Rich put the website on the berm — I don’t know if you’ve seen that picture or not. Do you know what I’m referring to?

L: The white letters that say www.serenity-springs.com on the grass berm facing the highway. He put that in probably in 2000 or 2001, and that helped a whole lot with just the interstate traffic — people seeing it, investigating, asking, “what is that place?”, and looking at the website. That was our first main way of advertising, I’d say. Then we also worked at that time with the local visitor bureau, and we were in more paper advertising. We did ads in the Chicago Tribune, the Sun-Times — small ads for weekend getaways, and that kind of stuff.

K: So far, we’ve mostly talked about what you and Rich were doing in those first couple years. As a family business, how have your kids been involved in Serenity Springs?

L: We say we’re a family business...we are and we’re not, you know what I mean? My kids grew up with it their whole lives. Do all of them have a hands-on, day-to-day responsibility with it? No. Because...because they’ve had enough of it, I guess!

L: You know what I mean? It’s just hard. I’ve always described Serenity as my fourth child. The difference between Serenity and my other three children is just that, as long as we have this business, I’m always going to have that 24/7 responsibility for Serenity. She’s never going to grow up, and she’s never going to go off on her own.

L: Rich and I are there day to day, either overseeing or working hands-on. Now we’re able to have more of a staff. The kids just help when needed — they all have their own lives and careers.

K: Yeah, that makes sense. So they were never responsible for running around, feeding the chickens or anything?

L: Well, growing up, all of them spent their summers during high school working at Serenity. My sons did property maintenance — landscaping, mowing the grass, weed whipping, picking up rocks and trash, etc.

All three kids have had lessons in driving the horse and carriage, and during those summers they put in their time driving the carriage.

My daughter, Ashlie, would run errands and get supplies. Sometimes it would be a part from Lowe’s, if Rich was in the middle of a project and needed something, but the joke in our family is that we always needed bananas. Because bananas only last a few days, we always had to buy them last-minute, so we’d always say, “Ashlie, can you run to the store and grab 22 bananas?” These days, “who’s getting bananas?” is still a big question.

K: What are their roles at Serenity Springs like now?

L: Nowadays, Miles, my middle son, will drive the carriage when Rich isn’t available — kind of on call to do that as needed. Trace does some of the technical stuff — with the Internet — or writes things if we need something written. When we need their help, they’re there. But it’s not like they’re on the payroll.

We’ve always tried to show the kids that if they have a dream, they should go for it, so Rich and I have never wanted them to feel like they have to sacrifice their ambitions and work at Serenity instead. They’re doing their own thing and following their dreams — they’re not falling back on Serenity for a job.

Stay tuned for part two of our conversation, in which Laura reflects on what it takes to sustain a family-owned business for over 20 years.

Embrace a blissful and luxurious escape at Serenity Springs in Michigan City, Indiana. This peaceful 85-acre resort offers the ideal destination for a romantic getaway, a couple’s retreat, honeymoon, or simply a relaxing vacation in their romantic cabins and surrounding areas. Located between Ann Arbor, Michigan, and Chicago, Illinois, Serenity Springs features stunning natural landscapes, cozy and well-appointed cabins, and a leisure experience unlike any other.